Hung Sao Do are the UK representatives for the exciting martial art of Chanbara. You can find out much more about this fantastic sport by following this link to the official: International Sport Chanbara website. 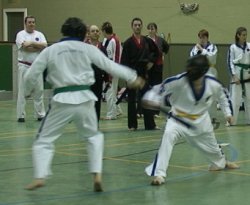 In 2006, the third European Championships take place in Italy, with representatives from 16 European countries. Hung Sao Do will be at the forefront of this sport in the UK in the coming years. Speak to your instructor if you are interested in learning more.

What is Sports Chanbara?

Sports Chanbara originated in Japan, invented by Tetsundo Tanabe, an instructor of the art of self-defense, and now president of the International Sports Chabara organisation.

Mr Tanabe took the idea from the freedom shown from children playing freely with sticks. And he developed rules and weapons. With the sport being played in a safe environment, with easy, clear and fair rules, Sports Chanbara was turned into a modern sport on the world stage.

The sport takes places between two players, with soft weapons named Air-Soft swords. These weapons are commonly either 60cm (Kodachi) or 100cm (Choken), and are literally air-filled like a bicycle inner-tube, covered with a soft protective sleeve.

The contest is a series of blocking and attacking moves between the two "fighters", jousting for a scoring hit to any part of the opponents body.

As mentioned, the International web site has a detailed set of information on Chanbara moves and video clips of Sports Chanbara in action.