History of Hung Sao Do

The term “Martial Arts” translates to “Those Concerned with the Waging of War”. Their study would develop both the character of the individual, and higher moral standards.

In order to learn the Martial Arts, the student must look deeper than the mere copying of Physical techniques.

Karate – The Way of Empty Hand

The art of karate is more than 1000 years old and originated in the ancient Orient.  As a result of its origins, an element of mystique is often associated with these ancient fighting forms, consequently many wrong, but commonly held ideas or beliefs abound.

Before we move on, it is probably appropriate at this point to explain the difference between freestyle karate and traditional forms.

Traditional styles were devised many hundreds of years ago and today remain largely unchanged.

Freestyle is a more modern concept; in simple terms it is a fighting form or means of self defense that has been created by utilizing the most effective movements from many different styles, together with new techniques developed by the creator. 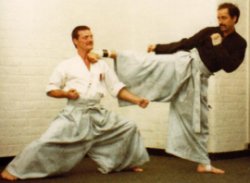 The discipline of Hung Sao Do was born in 1975, founded by Mr G. Bivona, an accomplished and highly regarded martial artist of many years experience.

During the five year period between 1980 to 1985, a few selected students were taught Hung Sao Do at the Newcastle Self Defense Centre. The popularity of the style exceeded all expectations.

In 1989, Hung Sao Do Karate was officially registered with the Amateur Martial Arts Association in London. The style has also been registered with United Martial Arts International and C.S.E.N. Sports Council for Italy, and is fully recognised by the new English governing body, Karate England.

Since then the founder, Mr Giuseppe Bivona, was been appointed Technician to C.S.E.N. and Area coordinator for United Martial Arts International, further evidence of the respect and high esteem in which he is held.

With the rise of Sports Chanbara, Hung Sao Do Karate has taken a lead in promoting the sport in the UK, and is recognised by the Japanese and European Sports Chanbara governing bodies.

Today, there are many schools, both here in the North East of England and in Italy. All of our schools are run to the same high standard by carefully selected, qualified instructors, who work in partnership with their students to achieve the very highest of standards.